STATEN ISLAND, N.Y. -- Over 50 shades of restaurants threw open their doors on Staten Island in 2017. Then suddenly, in all its purple glory, Violette's Cellar struck the scene in late fall with a daily brunch format and decidedly eclectic dinner repertoire.

The New Dorp restaurant lives in a subterranean space. Once home to La Botte and Troy, it is now a maze of intimate eating spaces awaiting discovery, most notably a "speakeasy" hidden behind a sliding bookshelf unlocked, curiously, only by secret code. Wine corks and crates make the wallpaper backdrop for banquettes and plush chairs fitted into the space.

It is complex, to say the least -- layer upon layers of frivolity and detail that build upon Botros' inaugural restaurant endeavors, The Stone House at Clove Lakes Park, and its subsequent off-shoot called "The Chef's Loft."

Now, with another new venture in the works with his fellow entrepreneurs -- "The Corner House BBQ," slated for a spring opening in the former digs of the long-running Corner House -- let's call Violette's Cellar the "Baroque Period" of this moment in Chef Botros' Staten Island cooking career.

FROM BROKER TO IRON CHEF: Botros did not go to culinary school. He is a self-made kitchen man, a mortgage broker by trade, who soon will debut as guest chef at The James Beard House. One might say he plays "Iron Chef" with Violette's menu, feeling his way through classic dishes while applying trills of texture and contrasting tastes. On the whole, the food at Violette's ushers a patron into an exciting journey of the senses and, particularly when Botros personally presents and explains the dishes, one can appreciate the obvious passion and decisiveness in their construction.

Take the "Chorizo Egg Scramble" at brunch, a riff on a dish that defeated Botros on "Guy's Grocery Games." The eggs fold chorizo, bell pepper and caramelized onions into tidy curds topped with crunchy fried wonton bits -- a dark-looking but delicious dish.

"Prosciutto and Fig Flatbread" is fantastic, a rainbow of flavors connected by fig jam, a whipped version of ricotta cheese, prosciutto, arugula and balsamic reduction. It's tough to say which is a better flatbread; the aforementioned fig concoction or roasted eggplant version blended with ricotta cheese topped with parmesan shaves.

Brunch starts with warm mini-croissants on a plate served with a ramekin of whipped butter. It could escalate from there with sides of smoked macaroni and cheese, brown-sugared bacon strips, maple sausage, french fries or engaging steel-cut oats, which are simultaneously creamy and briny with a satisfying chewiness.

About two dozen brunch items bob and weave through the menu: Poached eggs on proteins like "Zucchini-Egg Frittata" and a cheesesteak made with shaved rib-eye steak.

Shrimp is displayed with grainy oats plus ham gravy. Spring rolls are made from lump crab meat and empanadas are the crust for chicken pot pie.

"Chicken and Waffles" is served with an excellent chili-honey that pleasantly pokes into other dishes.

"Artichoke Bread Pudding" might be characterized as a perfect hangover food that might well be what brunch was meant to be. That unctuous thing sees a block of savory broiche-bread pudding sprinkled with artichoke, then bathed in spinach-flecked bechamel -- tasty yet perhaps a prototype to something even better down the line.

Dinner offerings -- oh, where does one begin?

There are brisket sliders, filet mignon satays, cheeses and meat boards to share. From a z-tray to pluck, there are delicious duck tacos with mole sauce-soaked shredded meat in fried wonton shells. There is a platter of dry-aged Tomahawk ribeye steak to savor with truffle-soy butter and mushroom trimmings, a "Lobster Tasting" with lobster roll sliders betwixt bacon-lobster ravioli and lobster oreganata plus an "Everyday Sauce" which is a version of "Sunday Sauce" and cavatappi pasta offered daily.

Because of its organization, the menu seems frenetic with categories like "Land," "Vegetables," "Salads" and "Large Format."

There are items like burrata cheese as an appetizer -- two balls of chilly burrata topped with granola, almond slivers and a saccharine chocolate-balsamic reduction -- a potentially thrilling dish that currently takes on the taste of a milkshake, for better or worse.

FOR YOUR PALATE PLEASURE: Working through this menu to find winning selections -- think great sensations on the palate and a nice depth of flavor -- with spinach salad and crisp bacon crumbles, blistered cherry tomatoes and gorgonzola dressing capped by a ripe, sliced avocado half. Roasted cauliflower (also presented fried) comes with cumin-garlic aioli to dunk. And "Charred Spanish Octopus," while it could use some splashy color on the plate, was a treat with black bean puree, bacon and chipotle oil.

And stay for desserts like the sweetly juvenile "Huckleberry Spring Rolls" served warm with Fruity Pebbles-spiked gelato, milk 'n' cereal at its best. Housemade gelato is delicious, especially a chili and spice-infused chocolate gelato slated for the Beard House dinner. Violette's creme brulee, seared with "Unicorn" sugar, carries through the purple-ness of the place with lavender buds in the creamy, vanilla custard.

And speaking of purple, the color nods to the restaurant's moniker and Peter's mother, Violette Botros, a victim of cancer and a source of inspiration for another cause: The ownership has pledged $250,000 to the Comprehensive Cancer Center at Staten Island University Hospital over the course of its lifetime.

At Violette's, the service is quite good with a knowledgeable staff who appear to take pride in the details of the restaurant, especially with the wine list.

For Staten Islanders wary of Italian food and the grind of ordinary sit-down dining, there is Violette's to discover. Stay for the ride and let's see what surprises it brings. 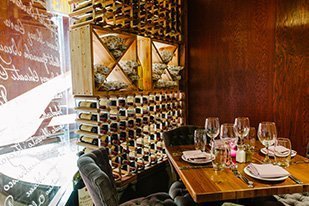 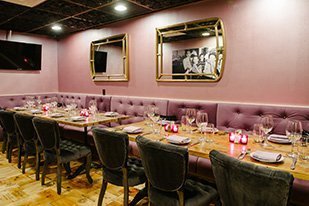 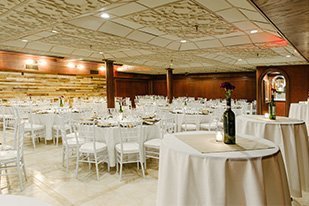 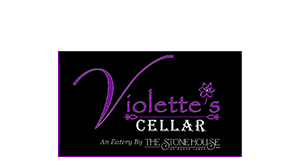